A daily campaigning against ticket touting has been absolved by the press watchdog over a story it ran on the issue.

The Daily Record’s ‘Stub out the touts’ campaign aims to stop the practice at concerts and big events, but the newspaper was investigated by the Independent Press Standards Organisation over a piece it published on the subject.

But, complaining to IPSO under Clause 1 (Accuracy) of the Editors’ Code of Practice, Ashley Young, said that it was inaccurate to say that secondary ticket sellers were breaking the law by selling pre-sale tickets. 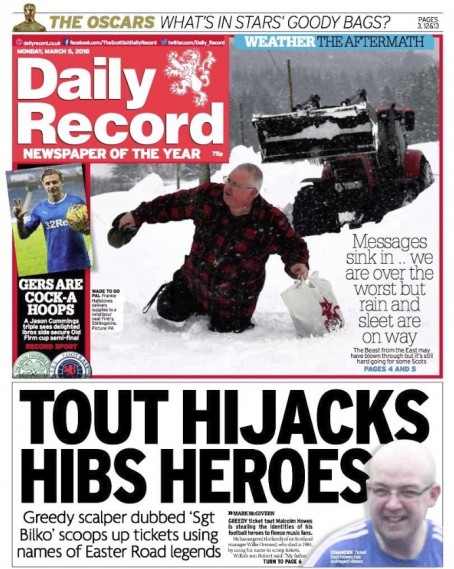 The Daily Record is campaigning against ticket touts

In response, the Record said that the article’s claim that the sellers were breaking the law was based on its interpretation of the Consumer Protection from Unfair Trading Regulations 2008, which stated that “falsely representing oneself as a consumer” was considered an unfair trading practice.

Mr Young said it was for the courts, and not the publication, to judge whether the unfair trading regulations had been broken, and that the publication had not provided any evidence of any prosecutions under this interpretation of the regulations.

IPSO found the Record had been able to provide a basis for its claim that the law had been broken, adding this assertion was supported by the claims of an “industry investigator” in the piece.

Tashinga Pswarayi complained to the Independent Press Standards Organisation that the Swindon Advertiser breached Clause 1 (Accuracy) over a story which reported that a warrant had been issued for his arrest.

The story was based largely on information heard at a court hearing, at which Mr Pswarayi had not been present.

Marcus Jones complained the Wrexham Leader breached Clause 1 (Accuracy) over an article which erroneously reported that a school had “cost” Wrexham Council more than £1.1m.

The story had been based on the council’s response to a member of the public’s Freedom on Information request, and the Leader had enquired about the accuracy of the information after Mr Jones’s complaint.

The Leader said the council took responsibility for the errors, and this prompted a substantial clarification in the next edition of the newspaper.

IPSO found The Leader had published satisfactory corrections to avoid a breach of Code.