Two sister dailies have launched a campaign to equip a women’s refuge in memory of a mother murdered by her ex-boyfriend.

The Eastern Daily Press and Norwich Evening News are aiming to raise £10,000 in honour of Kerri McAuley, who died at the hands of serial abuser Joe Storey in January.

HTFP reported in June how, following Storey’s conviction, Ms McAuley’s family gave permission for the Evening News to run a picture of her with a black eye on its front page, to show the abuse she had suffered.

The Archant dailies are now urging businesses to support their campaign. 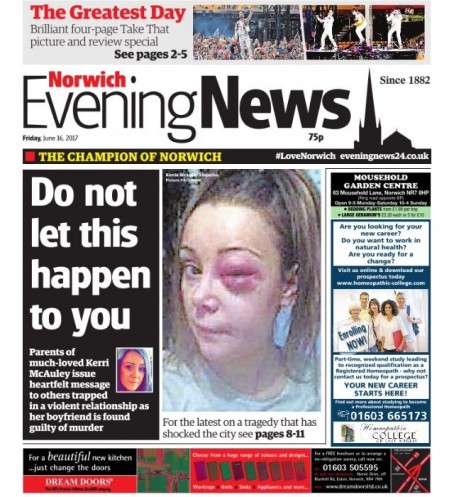 David Powles, EDP and Evening News editor, said: “The murder of Kerri McAuley was such a horrific crime which robbed a 32-year-old of her life, two children of their mum and a family of much-loved young woman.

“Kerri’s family and friends are rightly proud that despite her tragic death, she is still able to do some good for others, even if the campaign is too late for her.

“We are urging other businesses in Norwich and across Norfolk to do what they can to help us reach our target whether that’s by donating money to the campaign through the JustGiving Page that has been set up, holding office collections, or organising other fundraising events.

“Together we can all help ensure Kerri’s name lives on as part of a legacy that enables other victims to escape the horror of domestic violence.”