An archive of lost newspaper photos discovered by soldiers during Northern Ireland’s troubles have sold at auction for more than £1,000.

The 68 plate glass negatives from the 1930s, salvaged from an empty house wrecked by a bomb in Derry, were believed to be part of the archive of the Derry Standard, a weekly newspaper that closed in 1966.

It was estimated they would fetch between £250 and £300 at auction, but went under the hammer on Tuesday and were sold to a collector from the West Midlands for £1,020.

Many local people did get involved in the bidding and, according to the Derry Journal, are understood to have made all the early running before the English bidder won the auction. 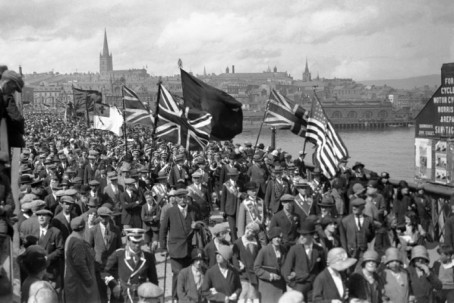 One of the images discovered following the 1969 blast

As previously reported on HTFP, British soldiers discovered the images under the floorboards of a house in Derry’s Waterside in 1969.

The negatives document life in Derry and the North-West of Ireland, and feature parades, dances, and sporting activities.

Auctioneer Paul Cooper, of CJM Asset Management in England, described the collection as a “quite stunning record of the people and places and life in the city more than eighty years ago”.