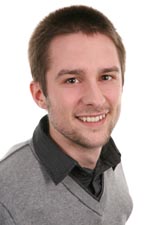 A newspaper journalism graduate has turned entrepreneur by setting up his own digital media company just 18 months after leaving university.

James Gordon, left, was an undergraduate at the University of Central Lancashire and worked for Manchester-based digital agency Fast Web Media before leaving to set up his own business, JDG Media.

As part of the business, James is also creating a network of sports websites, including lasttackle.com and britishicehockey.co.uk, which were set up while he was an undergraduate and have now secured a five-figure investment to develop them further.

He said: “Despite the economic climate and the fact I had a very good job in what is a difficult environment at the moment, I’ve been itching to do my own thing for a while, and it just got to the stage where I thought, let’s go for it.

“My biggest passion is sport and to be able to combine this with the journalism experience and training I have, as well as my knowledge of the web industry, and run my own business is a dream come true.”

“Although some graduates may be getting frustrated at not being able to find permanent employment, they should use their skills and try doing things off their own back.”

James has already secured top level ice hockey team Newcastle Vipers and basketball club Mersey Tigers as clients for his business, which is based in Warrington.

His former journalism tutor Delwyn Swingewood said: “It was clear from the beginning that as well as being sports mad, James was an exceptionally talented young journalist. He’s clearly a great businessman as well.”