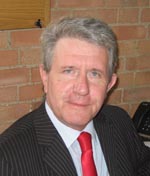 A former regional press journalist who became head of accreditation at the National Council for the Training of Journalists has lost his battle with cancer.

Stephen Chambers, left, started his career on the weekly Hunts Post before working for the Bristol Evening Post and the Daily Telegraph then moving into television journalism.

He joined the NCTJ in July 2006 and was head of accreditation for two years, continuing to be involved with the organisation as a consultant until last summer when he stepped down due to ill health.

Stephen died peacefully at his home after losing a long battle with cancer.

NCTJ chief executive Joanne Butcher led the tributes to him, saying: “Stephen was a much loved member of the NCTJ team, a wonderful colleague and a friend who I will miss terribly.

“His distinguished track record in newspaper journalism and successful broadcasting career made him a huge asset to the NCTJ.

“As head of accreditation he worked closely with course leaders and editors, a role he found both intellectually stimulating and fun.

“He believed passionately in the importance of journalism standards and loved giving back to the cherished trade that had provided him with so much over the years.”

Stephen moved into television journalism in the late 1970s, working for ITN, Thames Television and Anglia TV – where he presented the regional evening news programme.

Before joining the NCTJ, he worked for six years as a media relations and public affairs consultant in his native Northern Ireland.

Julian Calvert, from Glasgow Caledonian University, said: “Stephen was a real gentleman, who was never anything less than a pleasure to deal with; he had a combination of professionalism, authority and warmth which is all too rare.

“His support, sympathy and unfailing good humour will be missed by everyone who knew him.”

And Tom Hill, from Up To Speed Journalism, said: “Stephen was a witty, urbane and charming man who enjoyed a rich and varied career in both newspapers and television.

“He brought the benefit of that experience to the NCTJ at a time of great change in journalism and was able to offer wise counsel to both course leaders and editors during his time as head of accreditation.”