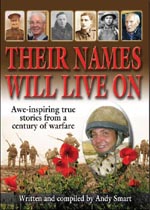 A columnist for a regional daily has had a collection of stories from war veterans published in a book which supports the Royal British Legion.

Andy Smart, from the Nottingham Post, has gathered together interviews he has conducted over the last ten years for a book called ‘Their Names Will Live On’, to ensure those who fought in conflicts are not forgotten.

The publication is based on articles which have appeared in the paper and covers tales from conflicts over the last century – with £2 from each copy sold going towards the charity.

Andy, whose time at the Nottingham Post and its sister weeklies has spanned more than 40 years, was previously deputy news editor for the title and has now semi-retired but still writes for its Bygones column and supplements.

He said: “In a newspaper career spanning more than 40 years, I have interviewed countless war veterans, from an old soldier who survived the trenches of World War One to a courageous casualty of Afghanistan.

“Without a single exception, the stories they told me were both awe-inspiring and humbling. They are the words of ordinary individuals called upon to carry out extraordinary acts of bravery and commitment.

“Not all the stories have been about survivors. So many young men failed to return from the greatest adventure of their young lives and it has been left to family members to keep their memory and history alive.

“In every instance, I have felt privileged to be allowed to share tales of glories long past, proud that I have been able to record their actions and honoured to be able to reveal their exploits to readers of my newspaper.”

He said wanted to write the book so there was a permanent record of the lives of the servicemen and they were not forgotten.

It is published by Matador and available from most good bookshops.