A weekly newspaper has used its front page to call for social media firms to close comments on court report stories after a trial it was covering collapsed.

The Rotherham Advertiser says it is now “impossible for newspapers to play their full part in the justice system” due to the effect platforms such as Facebook are having on the court reporting landscape.

The Advertiser’s call for change comes after the trial of ex-Lord Rotherham, Nazir Ahmed, was halted because the presiding judge declared the way evidence had been disclosed to his defence team by the prosecution had effectively “sabotaged” the chance of a fair hearing.

Before the trial was halted, Imran Khan, defending, presented comments to the court which were published on the Advertiser’s Facebook page, which he said could prejudice the trial, leading the paper to have to agree to stop publishing reports on the social media site even though other media organisations continued to do so. 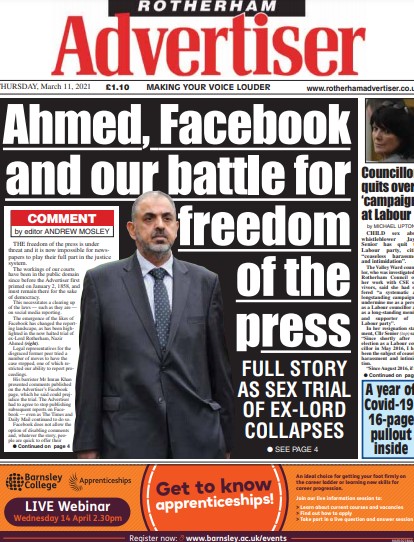 In a front page editorial, pictured above, Advertiser editor Andrew Mosley wrote: “The freedom of the press is under threat and it is now impossible for newspapers to play their full part in the justice system.

“The workings of our courts have been in the public domain since before the Advertiser first printed on 2 January 1858, and must remain there for the sake of democracy. This necessitates a clearing up of the laws — such as they are — on social media reporting.

“The emergence of the likes of Facebook has changed the reporting landscape, as has been highlighted in the now halted trial of ex-Lord Rotherham, Nazir Ahmed.

“Legal representatives for the disgraced former peer tried a number of moves to have the case stopped, one of which restricted our ability to report proceedings.

“His barrister Mr Imran Khan presented comments published on the Advertiser’s Facebook page, which he said could prejudice the trial. The Advertiser had to agree to stop publishing subsequent reports on Facebook — even as The Times and Daily Mail continued to do so.

“Facebook does not allow the option of disabling comments and, whatever the story, people are quick to offer their opinion — ‘hang him’, ‘vile bunch of thugs’, ‘disgusting’ — ignoring the law, unaware of how it works, and often commenting that they have been censored when we remove remarks.”

Ahmed went on trial in February accused of two counts of attempting to rape a girl under 16, indecent assault of a boy under 14 and raping a boy under 16.

The offences, which he denied, were said to date from the 1970s.

Judge Jeremy Richardson QC ruled last week all proceedings against him should stop due to prosecution errors.

In his editorial, Andrew went on to note that the argument that comments made by the public are preventing a fair trial is becoming increasingly common.

He said the solutions were either that newspapers do not publish court proceedings on social media sites which encourage responses – thereby moving away from the transparency judges say they want – or that Facebook is forced to change its comments policy.

Andrew added: “If the courts do not take the second option, more cases will be halted. Reporting will be restricted and the openness of the courts diminished, further reducing trust in our legal system.

He concluded: “Facebook is a useful gauge of public opinion but it can also cause a whole lot of trouble for media organisations. It will continue to do so until the law is changed or the social media platform is made to change its publishing policy.

“If solicitors continue to successfully use the same argument as Mr Khan, there must be a button available to prevent comments or the phrase ‘open justice’ will become a redundant one.”