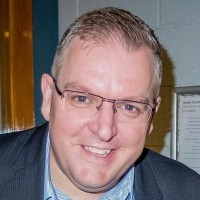 A journalist has warned of the “frightening” number of coronavirus conspiracy theories being touted to him by readers amid industry attempts to debunk the claims.

Doncaster Free Press reporter Darren Burke says he and his colleagues were accused of being part of a government “cover up” after the newspaper’s website ran stories rubbishing suggestions that 5G wireless technology was to blame for the outbreak.

At least 20 UK phone masts are believed to have been vandalised after false claims were spread that COVID-19 started in Wuhan because 5G equipment was in the process of being rolled out across the Chinese city.

Other regional publishers including Reach plc and Iliffe Media’s Kent Online website have also run stories and explainer pieces in a bid to debunk the claims.

Darren, pictured, touched on the subject in his regular ‘Don Your Way’ column, in which he explained why local journalists have been given government ‘key worker’ status during the outbreak.

He wrote: “We’re here to keep you updated with the coronavirus stories that matter to you in Doncaster that won’t be reported elsewhere.

“Sorting out the misinformation on Facebook, debunking all the nonsense about 5G (which we get a surprisingly frightening amount of) or simply telling you the opening times of the town’s supermarkets. The businesses that are doing their bit with deliveries, the people going out and about to raise a smile, the kids sticking pictures of rainbows in their windows.

It came after a number of readers contacted both Darren and the Free Press via Facebook over the stories debunking the alleged 5G “conspiracy.”

Speaking to HTFP, he said: “When we’ve carried these stories, we’ve been accused of spreading fake news or being part of the establishment helping to engage in a cover up.

“We’ve had reports of ‘secret’ 5G work being done in Doncaster during lockdown but with no evidence to back any of this up.

“Most of it comes in the form of conspiracy theorists sharing their views on Facebook but there have been a few messages from people suggesting that I’m being brainwashed and being told what to write by the government to stop what they perceive to be ‘the truth’ coming out.”

Reach made its own attempt to reveal the truth behind the claims in an explainer published across a number of its regional news sites.

In the piece, Reach journalist Joe Harker wrote: “Critical thinking and a bit of common sense are good antidotes for those caught in conspiracy theories. A bit of basic knowledge about viruses will help you understand that they can’t be caused or boosted by a mobile network.

“While the conspiracy theories about 5G are bogus the attacks carried out because of them are very much real, causing damage and putting people in danger of attack. Burning down a phone tower or threatening an engineer is very serious and could result in you facing criminal charges if caught.

“5G is not causing or boosting coronavirus, those claims are ‘complete rubbish’. NHS England medical director Stephen Powis has called the conspiracy theory “the worst kind of fake news”.

“It is biologically impossible for a mobile network to either suppress the human immune system to make people more vulnerable to COVID-19 or to actually transmit the virus.”

He added: “This is no time for misinformation, people are stuck inside their homes on lockdown and many will attempt to follow the news as a way of understanding the events going on around them.

“As more people are getting their news from social media it’s easy to understand why they would come into contact with conspiracy theories peddling bogus claims but it is dangerous for false news to translate into very real acts of vandalism.”

Kent Online ran an in-depth interview with Professor Nathan Gomes, who teaches at the University of Kent’s School of Engineering and Digital Arts which also touched on the issue.

He said: “I know one theory is that the virus is somehow transported by radio waves, which is completely ridiculous and completely impossible, of course.

“Another theory talks about immune systems being affected by 5G and radio signals, and there’s no foundation for that at all.”