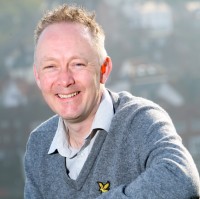 A former weekly newspaper editor is back in the hot seat in a new role he says he has “dreamt about” since childhood.

Jon Stokoe, pictured, has announced he is to edit Dalesman magazine, six years after he was made redundant from his role as editor of the Whitby Gazette.

After leaving the Gazette, Jon set up his own company, Stokoe Media, and has also worked full-time as a sub-editor for Reach plc’s newspapers in Lincolnshire.

Jon will take over the running of Dalesman from incumbent Adrian Braddy, who is leaving his post after seven years to take up a job as communications manager at Leeds-based charity SHINE, which works to tackle educational inequality across the North of England.

Jon told HTFP: “It’s a huge privilege to take over at Dalesman because it’s an institution in Yorkshire. A lot of people have grown up with it and I’m delighted to take my turn in the hot seat.”

“It will be tough to follow in the footsteps of Adrian and the other five editors who have served our county so well in the previous 80 years of The Dalesman.

“I hope that with the help of the fabulous team already based up in Skipton Castle, we continue to entertain our loyal readership while picking up more readers along the way.

“It is an incredible opportunity and a privilege to be only the seventh editor to act as custodian of one Yorkshire’s great institutions.”

Jon, who will also take on Cumbria magazine as part of his new role, currently works on titles including the Lincolnshire Echo, Boston Target and Retford Times.

He said: “I’ll be sorry to leave because I’ve worked with some great people there.

“I very much believe in local newspapers and feel there’s lots of life left in them, but this opportunity is the stuff I’ve dreamt about since I was a kid.”

It is expected Jon will take up his new role some time next month.