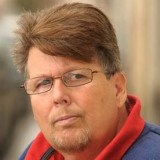 An alleged victim of Jimmy Savile who gave an indecent image of a child to a regional journalist has lost an appeal over his conviction for the crime.

Steven George, pictured, handed the picture of a young girl to a reporter from Portsmouth daily The News in a corridor at Portsmouth Crown Court.

George had attended the court, where a friend of his was being sentenced for having child abuse images, on 2 November 2016.

He later admitted distributing the printed image and was given a conditional discharge for 12 months and placed on the sex offenders’ register for one year.

At the hearing where he admitted the offence, George told Judge Christopher Parker QC: “There was no motivation and no sexual motivation to commit a crime. I was doing something for a friend.

“I could not take the document to a barrister and after giving it to the journalist, I realised it was too late. There was no motive to commit a crime. I do not look at pornography.

“I made an error of judgement in handing it to the journalist. When I handed it to him, I thought it was not a problem.”

However, the Court of Appeal in London rejected George’s bid to overturn his sentence and conviction at a hearing this month.

A former patient at Broadmoor Hospital, George claimed Savile sexually abused him while he was living as a woman.

He went public with the accusations in 2012 following the predatory Savile’s death in 2011.

At the earlier hearing, George added: “It is very difficult for me. I am a victim of sexual abuse. I was abused right into my late 20s.

“I was not intending to commit a crime whatsoever. It is too late now and I full accept that. I am somebody that has had no experience of pornography whatsoever.”

In his initial sentencing, Judge Parker said: “The motivation for providing the photo was not the purpose of sexual gratification.

“Your behaviour was completely misguided but this is not a case where you see a paedophile seeking to distribute indecent images to others.”