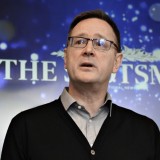 Former Johnston Press chief executive Ashley Highfield has joined the board of a luxury yacht firm along with an ex-Formula One racing boss.

Ashley formally stepped down as CEO as JP at Tuesday’s annual general meeting after nearly seven years in the role, to be replaced by chief financial officer David King.

Now he has been appointed as a non-executive director of Oyster Yachts, which describes itself as “one of the world’s leading manufacturers of premium sailing yachts.”

Ashley has joined the Oyster board along with Eddie Jordan, who ran the Jordan Grand Prix F1 team in the 1990s.

Posting about his new position on Twitter, Ashley wrote: “Delighted and honoured to be part of the crew. Oyster is Our World.”

Richard Hadida, Oyster’s CEO, said: “We are committed to building the best possible team here at Oyster which we believe will put us in the strongest position to deliver an effective turnaround and get Oyster back to where it should be – the absolute pinnacle in yacht design.

“Getting the right leadership, oversight and governance in place is key to building a sustainable business.

“Most importantly, all Board members are a great cultural fit. Their passion for sailing and the Oyster brand is clear.”