A weekly newspaper has launched a front page bid to “spring clean” its patch as part of its ongoing ‘Love Your Town’ campaign.

The Halifax Courier is calling on readers to help tidy up their local area after it was revealed more than 3,000 incidents of fly-tipping were reported to Calderdale Council last year.

The Courier has also received “dozens” of complaints about the issue in recent months.

The call appeared on the paper’s front page last week, pictured below. 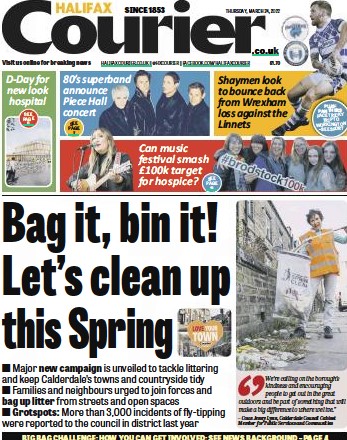 Editor Chris Lever told HTFP: “We’ve had dozens of complaints about fly-tipping, grotspots and littering in Calderdale over the few months – it’s a subject that really seems to get our readers’ backs up.

“It seemed apt to use spring as a time for a spring clean campaign, working in partnership with the local authority, to promote their ‘bag it, bin it’ drive and encourage local people to do their bit to keep our streets, villages, towns and countryside tidy.

“Hopefully Courier readers will respond and help to make a big difference in their communities and across the district.”