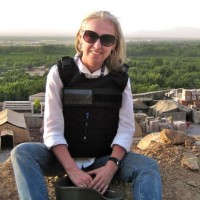 A war correspondent is set to speak at a press club event later this week.

The Birmingham Press Club has announced Lynne O’Donnell as its guest speaker for a lunch on Thursday.

Lynne, pictured, was bureau chief in Kabul for The Associated Press and the French news agency AFP between 2009 and 2017.

The Australian-born journalist, who won the Amnesty International Human Rights Press Award in 2011, has also worked in China and Turkey during her career.

Birmingham Press Club chairman Llewela Bailey said: “Lynne is an incredible journalist whose assignments have seen her reporting from war-torn Iraq and Afghanistan, from China and on political unrest in the Middle East.

“In her highly-praised book, High Tea in Mosul, Lynne captures the extraordinary true story of two Englishwomen who married Iraqi men and lived there for 30 years including time spent under the misery of Saddam Hussein’s dictatorship and the civil war which followed his downfall.”

The lunch will be held at Edgbaston Golf Club, Birmingham, at 1pm.