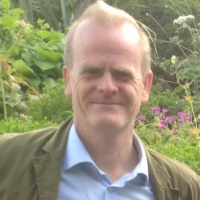 Tim Cornwell, who worked for The Scotsman and the Hull Daily Mail in the course of his career, was the son of spy novelist John Le Carre, regarded as one of Britain’s greatest post-war writers.

Tim had recently been working on A Private Spy, a collection of of letters from his father, with the book due to be published in October.

He died suddenly on 31 May while returning to London with his partner following a visit to his daughter.

Tim, pictured, joined the Hull Daily Mail after university before he and his then wife Alice moved to Washington DC, where she worked for a news agency and he worked as a freelance.

The family moved to Los Angeles in 1995 from where Tim filed reports for various UK publications including The Scotsman, covering stories such as the OJ Simpson trial.

Eventually in 2001 he was appointed The Scotsman’s deputy foreign editor and he and Alice moved to Edinburgh.

He later became the paper’s art correspondent, and although he left the staff in 2012, he remained a regular reviewer on the Edinburgh Festival.

Throughout his career he had suffered periodic mental health problem which came to a head in 2005 when he had a breakdown and was diagnosed with bipolar disorder.

In his obituary published in The Scotsman, David Robinson wrote: “Although in his later years Tim wrestled with the realities of bipolar life, he never let this define him.

“Editing his father’s letters seemed to help Tim find reconciliation. Although he still worried that publication of the book would be a disaster, those who loved him thought the opposite: that the delicacy and empathy shown in its editing would be praised and the whole process would anchor in him a greater sense of self-worth.

“The few who have seen it – including his father’s agent, publisher and three sons – are unanimous in their praise.”

Added David: “Although too young ever to remember his grandfather, [he] will one day grow up to find that, back in 2022, he dedicated his one and only book to him.”