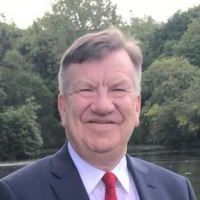 An editor who spent 46 years with the same newspaper has been awarded the British Empire Medal.

Wesley Atchison, who edited the Tyrone Constitution, has been recognised in the New Year’s Honours list for services to journalism and the community.

Wesley, pictured, joined the Constitution as a junior reporter and rose to become deputy editor before taking the top job.

He served as editor from January 1995 until his retirement in August 2020.

Wesley, 66, told the Impartial Reporter he was “humbled but delighted and grateful” to receive the honour.

A story by the Reporter added: “Wesley said it was a welcome boost, as well as a total surprise.

“He also said he was sure there were many who were more deserving of such an accolade, but he was extremely grateful to have been nominated and recognised.”

HTFP reported last week that current Henley Standard editor Simon Bradshaw has received the BEM for services to his patch during the coronavirus pandemic.