A probe has been launched into police secrecy after two sacked officers’ names were withheld from regional newspapers.

HTFP reported earlier this month that the Gazette and its publisher Newsquest had won a 10-month battle to name sacked PC Terry Cooke in the High Court.

The News has now also named Portsmouth officer Simon Bailey, who was found in October to have pursued a relationship with a domestic abuse victim. 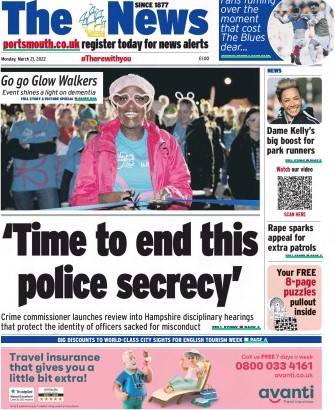 At the time of his sacking, Mr Bailey’s identity was kept secret despite submissions at the time from The News and other media.

However, the Portsmouth daily has now successfully identified him after his name was published on the College of Policing’s barred list.

Mr Cooke and his lawyers threatened the Gazette with legal action after it sought to report his name when he was sacked from the force following a secret tribunal in April 2021.

But, after Gazette publisher Newsquest began a bid to challenge the restrictions, it emerged tribunal chair William Hansen had not placed an anonymity order on the case, as Mr Cooke had claimed.

Discussing the launch of her review, Ms Jones told The News: “The starting point should be that hearings are held in public and the identity of those found guilty of misconduct, published.

“Whilst I accept there are circumstances when this is not appropriate, for example, a related ongoing enquiry, the withholding of an individual’s identity should only be in exceptional circumstances.”

“Publication acts as a deterrent and helps increase public confidence in the complaints and misconduct process.

“The public has a right to know about the conduct of officers and the media play an important part in reporting trials involving police officer.

“I support the changes to the complaints process in 2020, which outlines the media are to be consulted if reporting restrictions are proposed. This is designed to help ensure openness and transparency to the public.

“As police and crime commissioner, the conduct of officers is something I take seriously. By challenging Hampshire Constabulary to uphold the highest standards and supporting the force as it proactively tackles serious misconduct, I aim to ensure we have a police force fit for purpose across all our communities.”

A Hampshire Constabulary spokesman told The News: “During the [Mr Bailey] hearing, the independently appointed legally qualified chair put in place a reporting restriction which granted lifelong anonymity to the officer.

“The regulations governing misconduct hearings are laid out by the Home Office and followed by all police forces. The barred list is managed by the College of Policing.”