Newsquest to donate 5p from every paper sold today to Ukraine

Regional publisher Newsquest is donating 5p from every daily newspaper sold today to help the victims of the war in Ukraine.

Each one of the group’s daily titles, which include the Northern Echo, South Wales Argus and Southern Daily Echo, turned their front page yellow and blue this morning.

Newsquest’s weekly titles will also join the campaign and carry the special front page over the coming week.

The joint front pages were accompanied by a launch piece and a poster in the colours of the Ukrainian flag for readers to display in solidarity with the people of Ukraine. 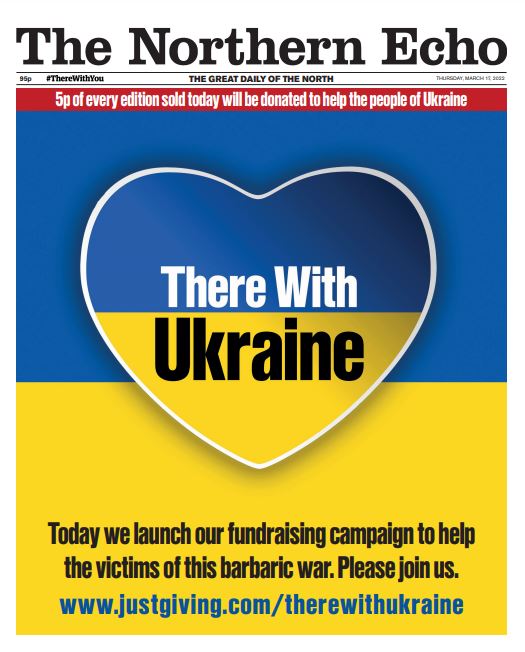 Editors up and down the country are asking readers to join them in pledging money to the Red Cross DEC UkraineHumanitarian appeal with a single Newsquest fundraising page set up for the cause.

Newsquest Editorial Development Director Toby Granville said: “We’re proud that so many of our news brands are standing united behind this cause as we launch our There With Ukraine appeal.

“Like everyone, we have been shocked and appalled at Russia’s invasion and want to do whatever we can to help.

“We know the generosity of our readers up and down the country and we hope they will join us in supporting this, the most worthy of causes.”

5p from the cover price of every Newsquest daily newspaper sold today will go directly to the Red Cross fund, which is dedicated to helping and saving those affected by the war.

The fundraising page for Newsquest’s There With Ukraine campaign can be found here.