Birmingham’s Sunday Mercury has revealed how warehouse worker Paul Martin is set to fly to the Alabama hospital bed of former adult actress Sasha Grey after receiving a message from a ‘medic’ who told him to “send £1,700 or she will die”.

Mercury journalist Mike Lockley looked into the issue after Mr Martin received the message and subsequently found no evidence Ms Grey is battling for her life in the UAB Hospital, Madison County, Alabama, as Mr Martin, from Rugby, was informed.

But the 52-year-old has stated his intention to make the £600 journey to the USA on Friday, despite being presented with Mike’s evidence and receiving a further warning from the Mercury about making the trip. 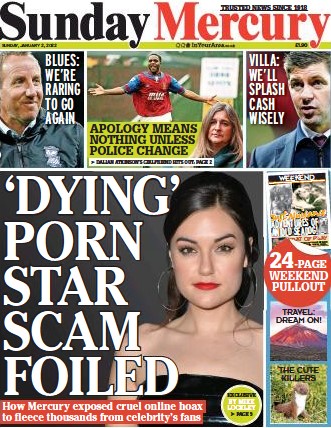 Mike’s investigation provided a splash for the Mercury on Sunday, pictured above.

According to Mike’s investigation, Ms Grey “remains very high-profile and appears to be in rude health”.

Messages sent to Mr Martin included “I’m in pain all the while. I’m dying, baby” and “I can’t survive this pain”.

Mr Martin told the Mercury: “We just seemed to connect and have a good laugh. She was looking for a European boyfriend and I wanted something different.

“She wanted to try it, she did it and she’s now more mature. She’s trying to get on day by day.”

He added: “Yes, it seems fishy, but I want to explore America before I die.”