A local newspaper has landed a national exclusive with one of the leaders of the bid to oust Prime Minister Boris Johnson on Monday.

Former Tory leadership contender Jeremy Hunt announced on Monday morning that he would not be supporting the PM in that day’s confidence vote, arguing that the party would lose the next election if he remained in the job.

Now Mr Hunt has explained in further detail why he voted to end the Johnson premiership in an exclusive interview with his local newspaper the Farnham Herald.

It is understood that the Herald is the first media outlet Mr Hunt has spoken to since Monday’s vote, which saw Mr Johnson cling to power by a margin of 211-148. 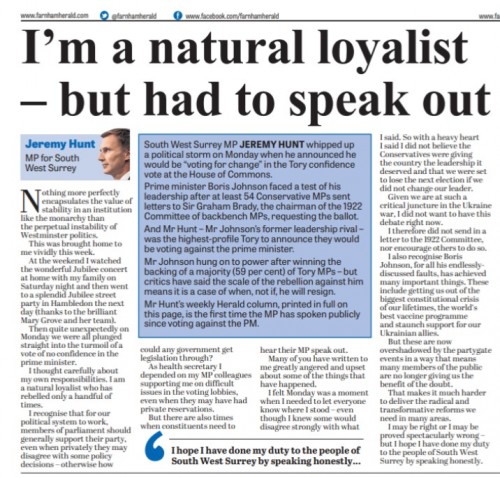 In his column, South West Surrey MP Mr Hunt said he voted against Boris “with a heavy heart” and admitted he may be proved “spectacularly wrong”.

But he added that the partygate scandal was now “overshadowing” Boris’ achievements, in a way that meant many members of the public “are no longer giving us the benefit of the doubt”.

“Many of you have written to me greatly angered and upset about some of the things that have happened,” he wrote.

“I felt Monday was a moment when I needed to let everyone know where I stood – even though I knew some would disagree strongly with what I said.

“So with a heavy heart I said I did not believe the Conservatives were giving the country the leadership it deserved and that we were set to lose the next election if we did not change our leader.

“I may be right or I may be proved spectacularly wrong – but I hope I have done my duty to the people of South West Surrey by speaking honestly.”

Daniel Gee, head of content at Herald owners Tindle Newspapers Ltd – Surrey & Hampshire, told HTFP: “We were as shocked as anybody when Mr Hunt announced he would be ‘voting for change’ on Monday morning.

“But having built strong relationships with all our local political leaders – of all political persuasions – we are always delighted when they chose to reach the electorate through our pages and website, and so were thrilled when Mr Hunt again chose to explain his decision in the Herald this week.

“We’ve reported on some seismic shifts in politics, both locally and nationally, in recent years and we enjoy facilitating a discussion with readers.”

The Herald previously broke the news in 2019 that Mr Hunt was to stand for the Tory leadership.  His column can be read in full on the Herald website here.