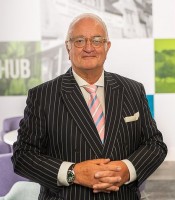 A long-serving former regional daily editor has received an MBE for services to the community on his patch.

Ian Mean, left, who edited Gloucester daily The Citizen from 2002 until 2012, has been named an MBE in the Queen’s Jubilee Honours.

After leaving the Citizen he became content director for Local World’s titles in the South West before a short stint as editor of the Western Daily Press from 2014-15.

Although now retired, Ian still works in the community and has chaired the Gloucestershire Hospitals Organ Donation committee for the last seven years.

“I feel very honoured that this is the Queen’s special birthday honours list,” said Ian, 75.

“I’m a person with strong views and opinions as an editor, and I was not always popular. But I like to think I was a critical friend and was always keen to be constructively critical where necessary.

“I tried to make a difference in journalism and I tried to do that through editing newspapers here and in Bristol.

“I believed in campaigning and I don’t believe an editor’s job is just journalism, it’s got to be tied to issues. I was very keen on issues, whether they were supporting the armed forces, to fighting to keep the Gloster’s regimental badge, or campaigns that really affected people.”

Ian began his career as a trainee reporter at the South London Observer. He then moved to Sheffield where he worked as crime reporter at the Morning Telegraph before moving to Manchester to join the Daily Mail.

After that he worked for the Daily Express, the Birmingham Mail and the Daily Mirror before joining the Citizen.

Ian added: “When I was chief news editor at the Birmingham Mail 35 years ago, I had 68 reporters all over the West Midlands.

“Those were big big days, the golden days of newspapers in the regions. That paper was selling 360,000 a night at that time and it’s now selling about 23,000. They were very exciting days.”

Also celebrating is Bob Warman who began his career at The Walsall Observer and The Birmingham Post and Mail.

Now an ITV News Central presenter, he has received an MBE for services to broadcasting and journalism.

Meanwhile, Plymouth-based journalist and campaigner Alexis Bowater is honoured with an OBE after working to combat violence against women and girls after a man was jailed for stalking her in 2009.

Alexis started her career as a reporter at The Express and Echo in Exeter from 1993 until 1995.