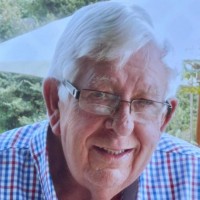 A journalist who reported from the fall of the Berlin Wall for a regional daily has died aged 80.

Tributes have been paid to Robin Thompson, who also covered the first Concorde flight and The Troubles in Northern Ireland for the Bristol Post.

Robin, pictured, also had articles published in the News Musical Express during his career, having edited his the music section of the Wilts and Gloucestershire Standard.

Born in Coventry and raised in Hinckley until the age of 10, he began his career on the Standard as an apprentice after moving to Fairford, Gloucestershire.

During that time he became lifelong friends with rock drummer Cozy Powell, known for his work with bands including Black Sabbath, Rainbow and Whitesnake.

After a decade at the Standard, he moved to the Post.

His family told the Standard in a statement: “During his time at the Post he was seconded for four years to the Glorious Glosters and Devon & Dorset army regiments covering the Northern Ireland troubles in Ulster.

“Robin also covered the first Concorde flight and travelled to Germany to cover the fall of the Berlin Wall.

“After he left the Evening Post, Robin continued to have a long and fulfilling career in business using his journalistic skills throughout.

“Even in supposed retirement his passion for writing continued.

“Many of his articles were published in the Wilts & Glos about the various charities he helped raise money for and the people that he helped.

“Robin’s family will miss him terribly but find comfort that his legacy in print will live forever.”