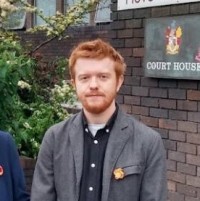 A journalism graduate has paid tribute to his murdered brother after his four killers were jailed.

Rory Henham has spoken out after the sentencing of Dushane Meikle, Gregory Hawley, Lamech Gordon-Carew and Alize Spence for a total of 86 years.

Rory’s brother Billy was beaten, stripped naked and thrown off a balcony at a disused building in Brighton on New Year’s Day 2020.

Billy’s killers have all been found guilty of murder and Rory, who studied jounalism at the University of Sussex, was present at Hove Crown Court with his parents Ian and Debbie for the sentencing hearing.

Rory, pictured, told the Brighton Argus the past two years had been “incredibly difficult for everyone, particularly my parents”.

Of his brother, he said: “This should never have happened. He was only going for a night out.”

Billy, 24, was subjected to a “sustained and significant” fatal assault from punches, kicks and stamps after spotting a party and deciding to join in, the court heard.

Judge Mr Justice Cavanagh told the hearing the motive for the assault appeared to have been to “punish” him “for some trivial or imagined slight”.

After the hearing, Rory described his brother as “really nice and kind”.

He said: “He was such a sweet person. A great brother. It’s going to be really difficult to move forward from this. In fact, I’m not sure if I can.

“Sometimes it feels like you’re going forward, and then you just stop. It’s like there is this on-off switch inside.

“The past two years have just been all-consuming.”