Michael Gove has praised a group of sister dailies after they targeted him with a coordinated front page design.

The Secretary of State for Levelling Up, Housing and Communities applauded the “hugely powerful intervention” by a number of Reach plc dailies across the North of England and the West Midlands as they attempted to highlight regional inequalities.

The joint splash, run with the headline ‘Don’t leave us behind’, comes ahead of the Convention of the North, which will see Mr Gove meet with Northern leaders today to discuss the Government’s ‘levelling up’ strategy.

It features pictures of eight babies born across the titles’ respective patches and makes the point that babies’ born in Mr Gove’s Surrey constituency are likely to be healthier, wealthier and better qualified than those born in many parts of the North and Midlands. 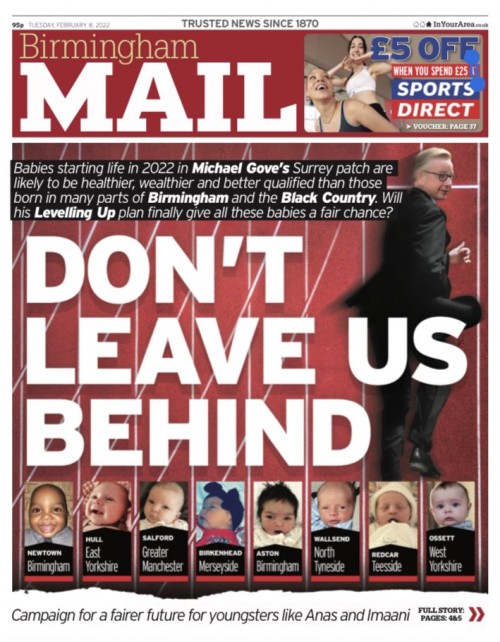 Posting on Twitter last night, Mr Gove wrote: “Hugely powerful intervention from the Liverpool Echo and papers across the North highlighting the urgent and vital importance of levelling up across the UK. I look forward to addressing the Convention of the North tomorrow.”

The project was led by Reach’s Northern Agenda digital newsletter, while the front page was created by Chronicle designer Gary Beckwith.

In a message to subscribers, Northern Agenda editor Rob Parsons wrote: “Levelling Up has become a phrase so well used in political circles that it has nearly lost its meaning.

“But its essence is trying to create a society where a baby born in Hull, Wallsend or Birkenhead has the same chances of a good life as one born in Surrey Heath, the affluent borough represented by Mr Johnson’s Levelling Up Secretary Michael Gove.

“At the moment the UK is as far away from this ideal as anyone could imagine. Children in left-behind parts of the country are far more likely to leave school lacking good qualifications, have a low-paying job, suffer ill health and ultimately die early.

“That’s why regional titles in the North and Midlands like the Manchester Evening News, Newcastle Chronicle and Birmingham Mail have teamed up with the Northern Agenda today to show the faces of the new babies whose futures depend on an end to the tragic squandering of so much human potential. Our message is clear: Don’t Leave Us Behind.

“Our eight babies starting life in 2022 come from a diverse selection of towns and cities but all grow up in an unequal society where many children’s life chances are diminished purely by virtue of where they are born.”

A similar project last year by a number of the titles involved parodied publicity material from the 1996 film Trainspotting after the Government axed the Eastern Leg of the HS2 railway line.

The splash was subsequently voted the best front page of 2021 by HTFP readers.