A football manager’s impromptu hunger strike prompted a regional daily to spoof a film series on its front page.

The Dundee Evening Telegraph parodied dystopian adventure films The Hunger Games after Dundee FC boss Mark McGhee revealed he had gone on a diet so as to be “hungry all the time”.

Mr McGhee made the revelation in a press conference ahead of Dundee’s crucial match against St Johnstone tomorrow.

The two teams currently occupy the bottom two places in the Scottish Premiership. 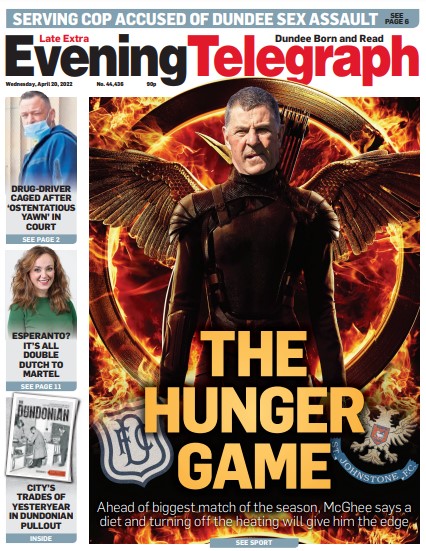 The Evening Telegraph ran the spoof, depicting Mr McGhee as teenage protagonist Katniss Everdeen, on its front page on Wednesday, pictured above.

Editor Dave Lord told HTFP: “Football managers will do just about anything to get a competitive edge, but when the Dundee gaffer said he was going on a crash diet to literally make himself hungry before the biggest match of the season even the crazy world surrounding Scottish football sat up and took notice.

“Mark McGhee also said he was going to turn off the heating before Dundee’s crunch game with St Johnstone.

“It was all very bizarre.

“Thankfully we have a talented team of designers at the Tele, so were able to come up with a very fitting way to tell such a bonkers story.

“And with Dundee’s very own Hunger Game on the horizon, the resultant front page got plenty of attention, both locally and further afield.

“Of course, we’ll only find out if Mr McGhee’s plan worked this weekend.”