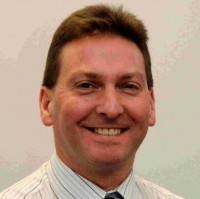 A football club have dedicated one of their matches to a sports editor who died aged just 57.

Weymouth FC made the gesture in memory of Nigel Dean, who spent 40 years with the Dorset Echo before he passed away in August 2020.

Nigel, pictured, was a lifelong supporter of Weymouth and also covered them in a professional capacity for the Echo.

A 17-strong group of his family and friends were made guests of honour at their 0-0 draw against Yeovil Town on Easter Monday.

Club chairman Ian White told the Echo prior to the match: “I was over the moon when I found out that this match was being dedicated to Nigel. I’m really pleased that he’s being remembered on such a big day for the club.”

He added: “I knew Nigel for a long time. He was such a super guy and he meant so much to so many people.

“He was the sort of person who never had a bad word to say. I’ve been with the club for 40 years and Nigel was always there.

“Just reading though the words that are in the tribute to him makes me well up, it was such a shock to lose him.”

Nigel’s wife Julie told the Weymouth-based daily he had once taken her on a date to one of the club’s matches in April 1987.

She said: “Sunday family roasts were spent discussing Saturday’s results and how Weymouth had played on the previous afternoon.

“When Nigel became sports editor, he still continued to watch Weymouth FC and report on them and he would often joke that his job working in the sports department was his hobby and he was being paid for it.”