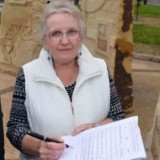 A former regional daily journalist has been awarded a top cultural honour on her patch.

Janis Blower has been chosen to become an Honorary Fellow The Customs House Academy, in South Shields.

Janis, pictured, worked at the Shields Gazette for almost 44 years and, according to the newspaper, remains a “local history doyenne”.

The Academy was launched to mark the 150th anniversary of arts venue The Customs House’s opening.

It recognises and honours the achievements of exceptional individuals who have made a major contribution to the world of arts and entertainment and have a significant connection with South Tyneside.

Ray Spencer, executive director at The Customs House, said: “Jeff and Janis are both legends in their own fields and have that rare gift in modern journalism that they are loved and trusted by the communities they serve.”