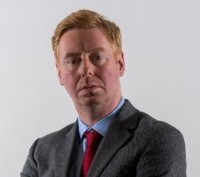 A senior editorial leader responsible for business and features content is leaving a regional daily after 14 years of service.

Yorkshire Post head of business and features Mark Casci has revealed his departure from the Leeds-based newspaper as he prepares to take up a new role with the West & North Yorkshire Chamber of Commerce.

Mark, pictured, held a number of senior roles at the Post including deputy news editor, head of news and business editor prior to taking up his current role in February this year.

At the Chamber of Commerce, he will serve as head of business representation and policy.

Announcing the move on Twitter, Mark revealed he was leaving the Post after “14 glorious, exciting and wonderful years”.

He wrote: “Leaving the YP is of course of a wrench. I was 27 when I joined, just a kid really.

“I have served as its rural affairs correspondent, deputy news editor, news editor, business editor and most latterly head of business and features. All of these roles have been an honour to hold.

“The title has given me so much. It has taken me all over the world, allowed me to win awards, meet interesting people and witness history.

“More than anything it has seen me work with and learn from some of the best journos in the country, some of whom I consider lifelong friends.”

Describing the Post as a “truly special place” he added: “I will always be grateful for everything it has given me. In many ways, aside from of course my family, working here has been the defining experience of my adult life.

“It has a powerful voice and a gravitas that is felt across the country. But the time has come for something new.

“The chance to do good for and campaign for a region I love with all my heart is one too good to turn down. I will be giving it my all. Thank you to everyone who has helped me in my career to date.”

Yorkshire Post editor James Mitchinson returned the compliment saying:  “Thank you for everything you’ve done for me during my tenure, for the title, and crucially for our colleagues. Bloody good innings, mate. You can hold your bat aloft.”

Mark, whose award wins include being named Wincott journalist of the year 2017 in the UK nations and regions,  has previously worked for the Bradford Telegraph & Argus and York Press.