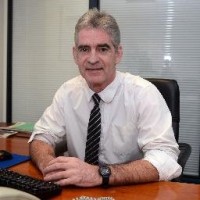 An editor has hit out at a councillor who made a “totally spurious” complaint against a regional daily.

Diarmuid McDonagh has criticised Councillor Nigel Brooks after he took the Bournemouth Echo to the Independent Press Standards Organisation.

HTFP reported last week how IPSO had rejected a complaint from the councillor after the Echo published details from an email he had sent to the chair and deputy of BCP Council, the unitary authority responsible for Bournemouth, Christchurch and Poole.

Cllr Brooks claimed the correspondence had been private and intended solely for the use of the individuals to whom it was addressed.

But IPSO sided with the Echo after the newspaper successfully argued the contents of the email had already been raised by another councillor during a previous public meeting.

Diarmuid, pictured, has now called into question the councillor’s complaint in a piece for the Echo.

He said: “This story was great example of scrutinising local councillors and holding them to account. This is part of our job and will continue to be so.

“It was clear from the outset this complaint has no merit whatsoever. I would like to thank IPSO for upholding the principles of strong local journalism in what was a totally spurious complaint.”

In his IPSO complaint, Cllr Brookes said the Echo “did not make clear that the reporter was themselves a councillor and member of a political party” – a claim branded “irrelevant” by the Echo in response.

IPSO found that the actual or perceived political affiliations of the journalist did not render the stories inaccurate or misleading.

Speaking to HTFP, Cllr Brookes said: “As a Cabinet+ member of the Conservative administration I felt it only right to seek redress with the IPSO.”