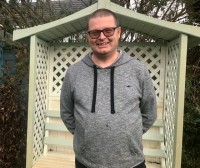 A local newspaper is set to open a public-facing office for the first time amid plans to expand in print.

The West Leeds Dispatch is preparing to launch a “community newsroom” where its team of 50 volunteer reporters will be able to meet, discuss stories and talk to members of the public.

The office’s opening comes after the Dispatch received a £112,000 award from the National Lottery’s Community Fund last year, which will cover the cost of its operations until 2024.

The award has also allowed the Dispatch to pay its editor John Baron and will fund three print editions of the title over the next two years, the first of which will be produced next month.

But John, pictured, hopes the grant will also spur the Dispatch on to produce regular editions of the newspaper, funded by other means.

Speaking to HTFP, he said: “What we hope to do is get two or three under our belts, start generating some revenue and hoping it will take off and become self-sustaining.

“The money we’ve got from the Lottery is seed money. We’re hoping by year three we’ll be doing this every couple of months, but we’ll see.”

It is hoped the new office at Bramley Lawn Social Centre will be opened later this month.

John said: “The office we’ve got will be exclusively ours to use as we see fit.

“I’d hope we’ll hold community reporter training there. It’ll be open in certain hours when I’m going to be there.

“Within the community newsroom we’re hoping to have an area where people can come, sit, chat and do interviews and it’s a space to use if [members of the public] have any stories.”

He added: “We’ve had members of the community come in to help with cleaning it and some have even made a couple of desks out of wood for us. It’s been a real community-led, bottom-up initiative.”