An editor has shared how he had to stop broadcasting live videos from a “mercy mission” to help Ukrainian refugees after the experience became “too raw”.

David Powles, who edits the Eastern Daily Press, has returned from a week-long trip to Poland, where he helped to distribute medical supplies and food to those fleeing the Russian invasion of Ukraine.

HTFP reported last week how David had set out on the 1,300-mile journey as part of a group of volunteers from East Anglia, and has documented his experience for the Norwich-based EDP.

Filing the last piece of his trip, David described the “sheer intensity” of the situation he found himself in. 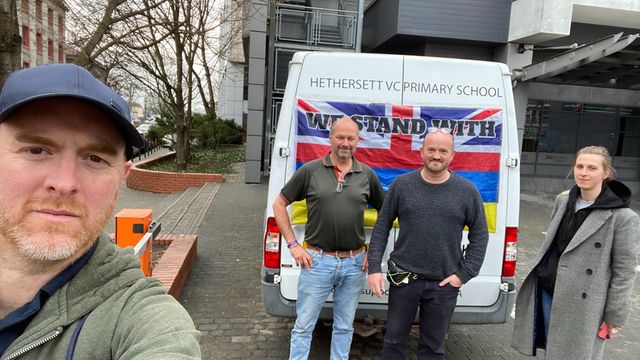 He wrote: “As viewers of our daily Facebook Live videos have seen, our week near to the Ukrainian border has been one when emotions have repeatedly run high.

“There’s been anger and frustration, sadness and sorrow. And doing Thursday’s live video it all got a bit too much, with the tears arriving and forcing me to turn the camera off. By Friday and Saturday it all felt too raw to do more videos.

“However, we’ve also experienced laughter and joy and moments highlighting the very best of humanity. Like when we were given a car safety seat by a charity to help transport baby Hope.

“Or the hugs, high fives and games of rock, scissors, paper with little Jan, three, and six-year-old Mackar.

“It is this humanity which is so far away from what Putin would like to see. But it is moments like this which made the trip all the more worthwhile.

“And it is moments like this that make you realise kindness and compassion will always trump evil and hate.”

David had been due to return home on Friday but decided to extend his trip by 24 hours to offer further help.

He added: “Back home now it’s time to reflect, repair and recover. And I’m sure that soon it will all start to feel like a distant dream.

“But for those Ukrainian families the threat from Russia is still very real.

“I hope I’ve helped to do my part to highlight why we all should care and think of how we may be able to help.”