A regional daily’s editor has defended his decision to publish a picture of Hitler on its front page following criticism by Jewish community leaders.

Arron Hendy has said the image was not “meant to be offensive in any way” after it appeared on the cover of Brighton daily The Argus yesterday morning.

The picture was used to illustrate a story about a person who had used the name ‘Adolf Hitler’ to sign a petition calling for the return of a cycle lane in Hove.

It was accompanied by the headline ‘Who do you think you are kidding?’ in reference to the theme tune of BBC sitcom Dad’s Army, which followed the adventures of a Home Guard platoon during the Second World War. 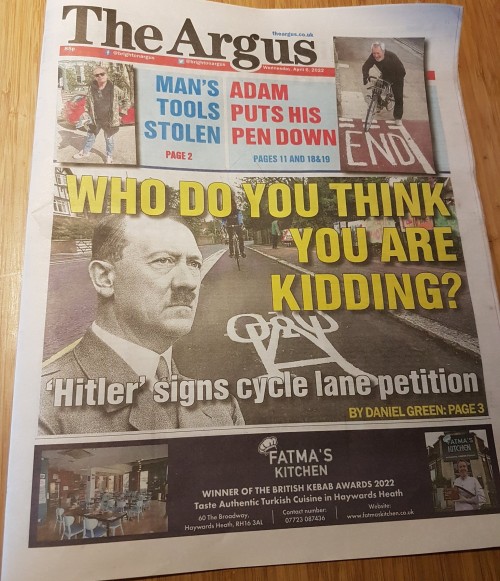 However, the design prompted criticism from the Sussex Jewish Representative Council, an umbrella group for Jewish organisations on the newspaper’s patch.

The group, which is affiliated to the Board of Deputies of British Jews, voiced its displeasure at the splash on Twitter.

In a post yesterday morning, it wrote: “We have written to Arron Hendy and The Argus to express our shock at the offensive cover on today’s paper. Our community deserves better from a local paper.

“There are few reasons that justify putting a photo of Hitler on the cover – fake names on a petition is not one of them.”

The council’s communities consultant Fiona Sharpe told HTFP: “We were shocked to see a photograph of Adolf Hitler on the front cover of the Argus as some sort of cheap clickbait used to draw attention to a story about people putting fake names on Council petitions.

“This lack of sensitivity, of historical referencing, is crass and offensive. We are blessed to still have Holocaust survivors in our community and we are aware of the distress this has caused.

“To take the image of a man responsible for the systematic slaughter of six million Jews, along with millions of other innocent victims, and use it as an illustrative point is in exceptionally bad taste and demonstrates a lack of care and understanding.

“At a time when we continue to see rising antisemitism across the country, a story that The Argus covered only recently, the casual use of Hitler’s image only serves to minimise the true horror of the Holocaust.”

The Argus reported how Hitler’s name was one of several bogus signatories that appeared on two rival petitions about the cycle lane.

‘Hitler’ was subsequently removed from the petition, which is due to be put before a full meeting of Brighton and Hove City Council tonight.

Arron told HTFP: “The picture of Hitler was used to illustrate a story about people using fake names on a petition.

“It wasn’t meant to be offensive in any way.”