Fighting Ukrainians are set to benefit after a regional daily appealed for donations of military kit to help their cause.

An office full of supplies will be shipped out to those on the front line of resistance against Russia’s invasion thanks to the appeal by Portsmouth daily The News.

Donations worth an estimated £60,000 including body armour, medical supplies, Bergens, boots, clothing, sleeping bags and more were sent to the offices of The News following the campaign’s launch.

The appeal was run with Portsmouth North MP Penny Mordaunt after she spoke to the Ukrainian embassy to work out what would be the most useful way to help. 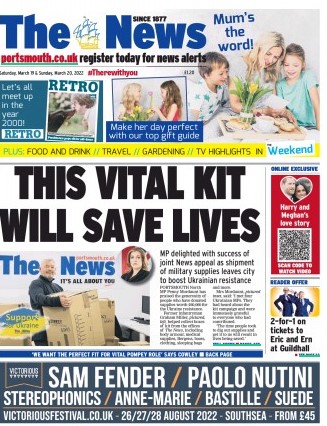 The News splashed on the appeal’s success on Saturday

Editor Mark Waldron said: “We’re humbled by the efforts that people went to for the donations.

“The office was full of gear and we hope it proves helpful to the Ukrainians in their hour of need.”

She told The News: “They had heard about the kit campaign and were immensely grateful to everyone who had contributed. The time people took to dig out supplies and get it to us will result in lives being saved.”