A regional daily has issued a front page plea for a football team it covers to “do better” for the sake of job prospects its patch.

The Liverpool Echo has written an open letter to bosses at Everton FC after they narrowly avoided relegation from the Premier League on Thursday evening, providing a splash for today’s paper.

In his open letter, the Echo’s Everton correspondent argued such a close shave “must never happen again” and shared fears that “relegation would likely have put livelihoods and projects at risk”.

The club are currently in the process of building a new stadium at Bramley-Moore Dock, in Liverpool, as they prepare to leave their historic Goodison Park home. 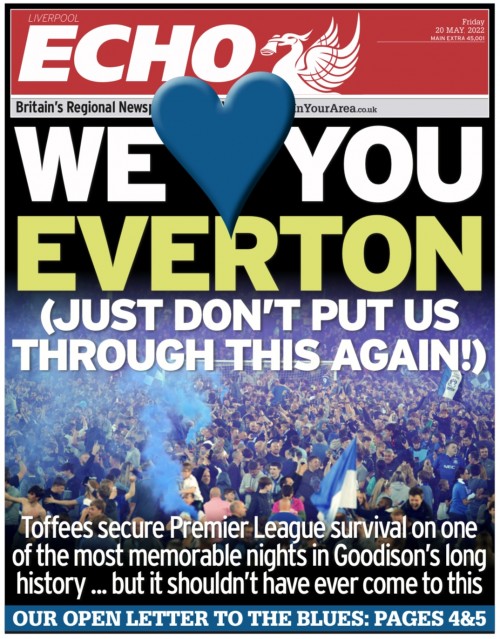 Wrote Joe: “The struggles of a business hit all of its interests though. Relegation would likely have put livelihoods and projects at risk. They include the Bramley-Moore stadium plans.

“The stadium is an initiative that exists for footballing reasons but offers the best chance of regeneration in decades for one of the most deprived areas of the UK.

“While the club insisted the development would continue regardless of this season’s outcome, it is difficult to see how the plans could have been completely safeguarded from the turmoil of at least one season in the Championship.”

Joe went on to note that while Everton are “not subject to the same rules of transparency as public bodies,” greater openness and dialogue with supporters would be “a significant move in a better direction.”

He added: “A club that puts so much stake in its role as a community asset, that has drawn so much on the passion and patience of a fanbase so important in making Goodison Park a fortress when the players really needed it, must now repay those supporters by showing their love and loyalty is not being taken for granted.