A regional daily which produced two front pages as a campaign’s success hung in the balance is celebrating after being able to run its preferred splash.

The Bradford Telegraph & Argus was able to commemorate Bradford’s winning UK City of Culture 2025 bid after its patch secured the title.

Bradford’s success was confirmed on Tuesday evening and the T&A had produced alternative front pages to run yesterday depending on the result.

The T&A had served as the bid’s official media partner during the process and its coverage was praised by City of Culture judges. 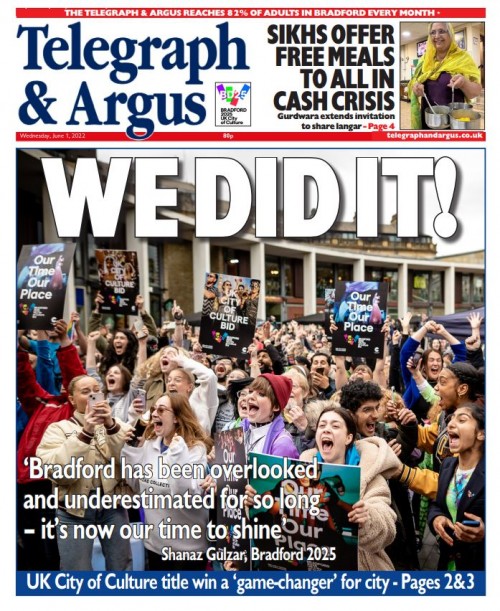 Editor Nigel Burton told HTFP: “The T&A has been working closely with the Bradford City of Culture team for the past couple of years highlighting the great work already being done in the district as part of the bid.

“The collaboration has even extended to carrying the City of Culture logo as part of the T&A’s front-page furniture every day.

“For the judges’ visit we pulled out all the stops to produce a City of Culture special with pages of endorsements for the city’s bid from personalities, politicians and community leaders across the district, as well as features highlighting what a worthy winner Bradford would be. It was very gratifying to have our coverage mentioned by the judging team.

“Because the decision was a closely guarded secret – we were warned beforehand no one would be given an early steer as to the likely winner – we actually produced two sets of front pages and inside features, one for if we won and the other in the event of Bradford just falling short.

“So, when the announcement was made, we had the front page ready, apart from the main image of supporters reacting in Bradford city centre, and the bones of a special report ready to go.”

The T&A also ran a live blog on its website with interviews, images and video by Brad Deas.

Nigel added: “Claire Early did a fantastic job coordinating our online coverage and worked well into the night to make it as comprehensive as possible.

“Huge credit should go to our features editor Emma Clayton, who has worked on the bid coverage from the start, and Natasha Meek who has helped bolster our editorial firepower in the past couple of months.

“The T&A is delighted to have played its part in Bradford’s success; important lessons were learned after the city narrowly missed out on the European title 14 years ago and in 2022 there really was a sense of ‘now it’s our time’.

The T&A’s fellow Newsquest daily the Northern Echo also splashed on the result yesterday, having campaigned for County Durham to be the winning entry. 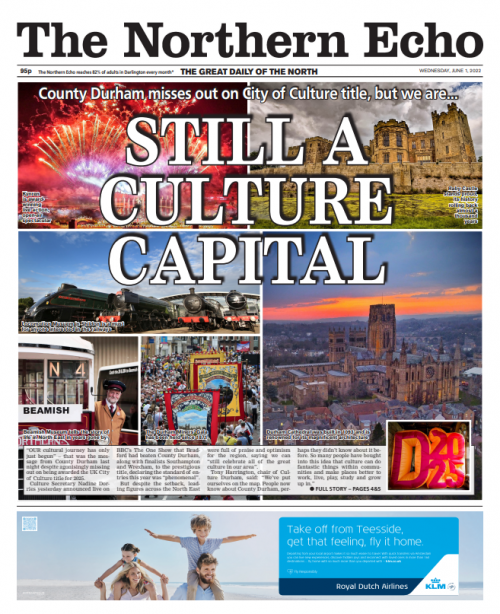 Nick Gullon, audience and content editor at the Darlington-based Echo, posted on Twitter: “County Durham may have missed out on the City of Culture 2025 title.

“But whatever anyone else wants to tell us, we are still proud of where we come from and the place we call home.”