A regional daily has made a front page plea for government bosses not to “blight large areas” of its patch as part of the HS2 project.

The Manchester Evening News has warned the city it serves faces being “scarred by a concrete jungle of viaducts and ugly structures” if its planned new HS2 railway station is built on stilts rather than underground.

Transport Secretary Grant Shapps previously stated an underground option had been ruled out because it would “take a lot of money out of other parts of the network”.

But, ahead of the HS2 Crewe-Manchester Bill yesterday being prepared for a second reading in the House of Commons, the MEN urged ministers to think again on its front page, pictured below. 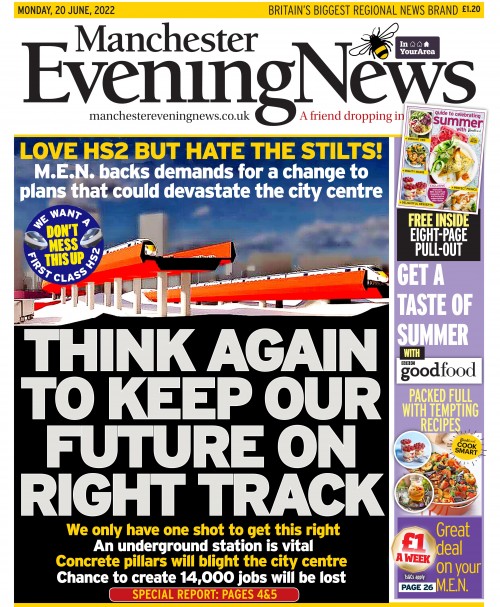 In an accompanying editorial, the newspaper’s transport and environment reporter Charlotte Cox warned the move to build an overground station was “short-sighted and stifling to long-term ambition”.

Charlotte wrote: “Manchester leaders, while welcoming the investment and rail capacity that HS2. brings, say this cheaper option will mean building on 500,000sq metres of prime development land, severing east Manchester communities, cutting off Metrolink lines, and blighting the city centre by turning swathes of land into a building site.

“They believe the loss of land for development alone could cost 14,000 jobs.

“Crucially, a turn-back surface station, rather than an underground through-hub, means the Government’s cut-price Northern Powerhouse Rail – downgraded in Grant Shapps’s Integrated Rail Plan in November last year – could not be brought back to life in the future as the hub will hit full capacity from day one.”

“Today the Manchester Evening News calls on the government – and those MPs who are appointed to the committee – to look closely at the plans and listen to rail experts and local leaders whose experience and knowledge of the area is crucial.

“The £96bn being spent on rail in the north of England is long overdue, and welcome. But it has to be done right.”

The MEN was among a number of northern dailies to run the same “brutal splash” urging Boris Johnson to keep his promise on rail improvements following November’s announcement, which revealed diluted plans for a new line between Leeds and Manchester.

Editor Darren Thwaites told HTFP: “This is one of the most important transport investments the north has ever seen so it’s absolutely vital that it’s done properly and not on the cheap.

“The current plans will blight large areas of the city centre and cost jobs, development and prosperity for generations.

“We have one chance to get this right and we believe the economic case for doing so is overwhelming.

“While we support rail investment and HS2, the comparison between the London end and the Manchester end indicate the very opposite of levelling up in government thinking.”