Forest have not played in the top flight this century but will now do so for the first time in a generation after beating Huddersfield Town in the Championship play-off final.

Simply titled ‘Back Where They Belong’, the bumper 48-page edition went on sale on 4th June and has since been snapped up by thousands of fans online and in newsagents around the city centre. 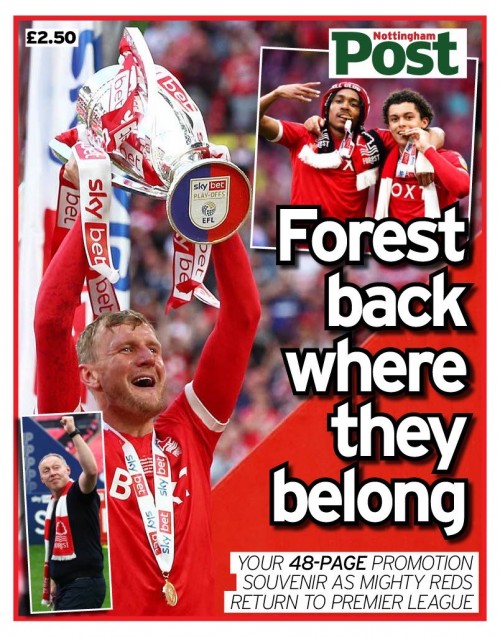 Head of sport for Reach plc in the Midlands, Steve Wollaston, told HTFP: “The Nottingham Forest interest on our website and in our papers has been massive.

“We have worked around the clock putting the finishing touches to what is genuinely a must-have product for fans.

“We wanted to capture the emotion of the day at Wembley, what it means for the club going forward, and the rollercoaster ride they have been on this season.

“The demand for it in advance of going on sale was tremendous, and we are seeing similar interests at the shops.

“It’s a slice of history and a memento of the brilliant achievement of the team, and the pride Nottingham has in them.

“This is a huge club that has been in the doldrums for far too long, this really could be the start of the next chapter at the City Ground.

“Hopefully we will be able to do a Forest in Europe special in the not too distant future!”

The souvenir edition is priced at £2.50, and can be ordered here.