The father of a journalism graduate who died suddenly has undertaken a 29-mile charity walk to mark what would have been his son’s 29th birthday.

Ian Redfern walked from his hometown of Long Eaton to Leicester, where his son Adam trained to be a journalist at De Montfort University.

Adam was a social media and digital communications officer at the university prior to his death last year at the age of 28.

He had collapsed while jogging after suffering a suspected heart attack. 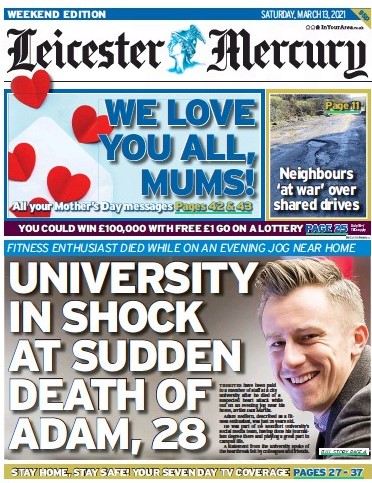 How Adam’s death was covered by the Leicester Mercury

Adam studied journalism at DMU between 2011 and 2014, during which time he also wrote about sport for the Leicester Mercury.

Mr Redfern received sponsorship for his challenge to go towards the Adam Redfern Memorial Fund, which has raised £22,000 to support media, journalism and sports students and raise awareness of sudden arrhythmic death syndrome.

After completing the walk on Sunday, Mr Redfern told the Mercury: “I think Adam would be incredibly honoured by what we have achieved in his name so far.

“DMU was a massive part of the last 10 years of his life so to know that his legacy is helping other students, I think he would be really proud.”