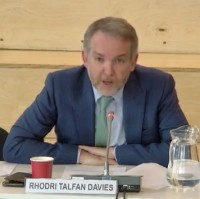 A top BBC executive believes the local democracy reporting scheme could carry on beyond 2027 – but has ruled out an expansion into court coverage.

The BBC’s director of nations Rhodri Talfan Davies has reiterated the corporation’s commitment to funding the partnership with the regional press industry until the end of its current Charter in 2027, adding the scheme “may still be a good idea” beyond that.

But, appearing before the Digital, Culture, Media and Sport Select Committee’s inquiry into the sustainability of local journalism, Rhodri said he felt it would be “difficult” for the service to expand into court reporting – a move that has been repeatedly suggested in recent years.

During the session, Rhodri was questioned by Committee chair Julian Knight as to whether he felt the point at which the BBC could “transition away” from “picking up the slack” with the LDR scheme would be if there was a “fairer remuneration” for commercial publishers for their content online

Rhodri, pictured at the inquiry, said: “I’ve always believed there is room in the local marketplace for a plurality of suppliers.

“It would be a crying shame if the BBC was last man standing in any marketplace in any community, and there is clearly an opportunity – and we’ve seen this has been taken up in other countries – to find a better balance between the benefits that the large tech giants are seeking and a fairer balancing of revenue back into some of the local publishers.

“That said, LDRS may still be a good idea and we’ve committed now to funding it through to the end of the Charter because we benefit too.

“It’s a win-win. This is content that’s being created that is being syndicated to all publishers and I think there is a common cause there that’ll certainly survive the next few years.”

Rhodri was subsequently asked by Tory MP Simon Jupp, himself a former BBC journalist, whether he could see the LDR scheme growing.

Previous calls for the scheme to be expanded to include court coverage have come from figures including Mark Hanna, co-author of McNae’s Essential Law for Journalists, and John Whitingdale, when he was Minister of State for Digital, Culture, Media and Sport.

In response, Rhodri said: “When we were kicking this around with NMA members a couple of years ago there were a number of areas that were suggested.

“Probably the primary one was court reporting. I think there’s two issues with that proposal.

“One is, is it a public good to see significantly more crime reporting? I remember being beaten over the head as a programme editor back in the 90s for too much crime reporting.

“The second is that actually there are still some viable commercial models in court reporting, through wire agencies and some of the larger publishers. So it’s difficult, I think, to identify a clear cut area in the same way that local authorities provide one, where the deficit was very clear.”

David told the MPs he believed the “safest place for local journalism to flourish” was “with a successful commercial model behind it”, such as Reach’s.

Natalie disagreed, telling the hearing: “I would challenge that strongly in the sense that these are models about getting short-term profitability that happened a long time ago.

Mr Knight went on to question David on what sort of difference “fair remuneration” for news content from social media companies would make to his business.

David said: “It would to a large extent set the local part of our business fair for the future. It would have a transformative effect on local news. I can only speak for one of the larger regional publishers in the UK but I’d imagine it would be the same for all publishers.”

Both Natalie and Paul agreed on this point, with the latter telling the Committee: “It would be great if Facebook really did put their money where their mouth was.

“News is part of the vital ecosystem of a community and if you remove it from a community then it will fail.”

Defending Facebook’s current policy on revenue sharing with publishers, Mr Severinson said: “Facebook is a free tool that publishers can use to extend their audiences but we don’t believe that we should be paying publishers to do free marketing on our platform.”

Taken to task by Mr Knight on the fact Facebook is “making money from journalistic input”, he claimed it was “a very common misconception” and said Meta “does not profit from news content” because the vast majority of what people see on Facebook is video instead.

Putting forward Google’s stance, Mr Morrison-Bell noted the company had signed licensing deals with more than 20 UK publishers. “We’re in discussions with what the best ways to get to the independents, locals and some of the smallest organisations are so that they can benefit from that as well,” he added.