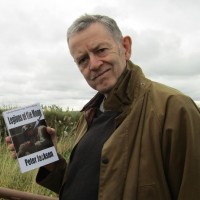 Tributes have been paid to Peter Jackson, who was four times named North East Business Journalist of the Year during his time at Newcastle daily the Journal.

During his time at The Journal, he also helped the newspaper to become national title for the BT Regional Press and Broadcast Awards in 1998 and Business Paper of the Year in 2001.

Peter, pictured, had suffered from a long-diagnosed condition affecting his breathing that had worsened over the last year.

He had been working on the second installment in a historical fiction trilogy before he passed away.

Graeme Whitfield, current editor of The Journal, said: “Peter was a great presence in the newsroom – knowledgeable and fun and a great writer.

“It was great to see Peter turn his hand to fiction with such success and I’m only sorry we didn’t get to see more of this ‘second act’ in his writing career.”

Lancashire-born Peter read Modern History at the University of Oxford before going to work in the City of London for eight years for accountants Coopers & Lybrand, merchant banks and stockbrokers.

While in London, he met his wife Anne in 1984 and the couple decided to return to Lancashire four years later.

There, they ran a cleaning and car valeting business for a time where Peter decided to retrain as a journalist at Lancashire Polytechnic.

After qualifying he worked on newspapers in Lancashire, including the Chorley Guardian, before moving to the North-East of England and joining The Journal.

Peter was business editor for four years and business reporter for three, with a year as features writer, prior to his departure in 2002.

He worked in PR but returned to writing in 2008 and as a freelance journalist spent two years editing North East Contact magazine and BQ2 magazine, contributing features to regional and national publications on subjects ranging from business to showbusiness celebrity interviews.

Two years ago he published his first fiction novel, Legions of the Moon, a historical adventure set in the Roman fort of Longovicium as its location.

Peter passed away on 31 March with his wife by his side and he is also survived by son Harry.

His funeral was held on Thursday at Mountsett Crematorium, Dipton, County Durham.