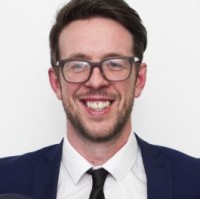 An award-winning chief reporter has left print journalism for a new broadcast role with the BBC.

Gordon Blackstock has announced his departure from Glasgow’s Sunday Mail, where he has worked since 2020.

He has now joined BBC Radio Scotland, where he will work on its Good Morning Scotland programme.

Prior to joining the Reach plc-owned Mail, Gordon spent 13 years with the rival Sunday Post.

While at the Post, he won a hat-trick of prizes at the Scottish Press Awards in 2018.

Gordon, pictured, was named Journalist of the Year and Reporter of the Year, as well as taking Scoop of the Year. He subsequently had a two-year spell freelancing before joining the Mail.

Posting on Twitter, Gordon wrote: “Alas my race at the Sunday Mail has come to an end. Grateful to [Sunday Mail editor] Lorna Hughes for her support and appointing me chief reporter.

“It’s been a privilege. Onto pastures new at BBC Radio Scotland working on Good Morning Scotland.”