A weekly newspaper has urged visitors to respect the countryside in a new campaign.

The West Sussex Gazette is urging those enjoying its patch to do so responsibly after running a special report on the updated Countryside Code.

In the coming weeks, the Gazette will be focusing on topics such as littering and keeping dogs under control after several incidents of sheep worrying recently.

The campaign was launched on the title’s front page last Wednesday, pictured below. 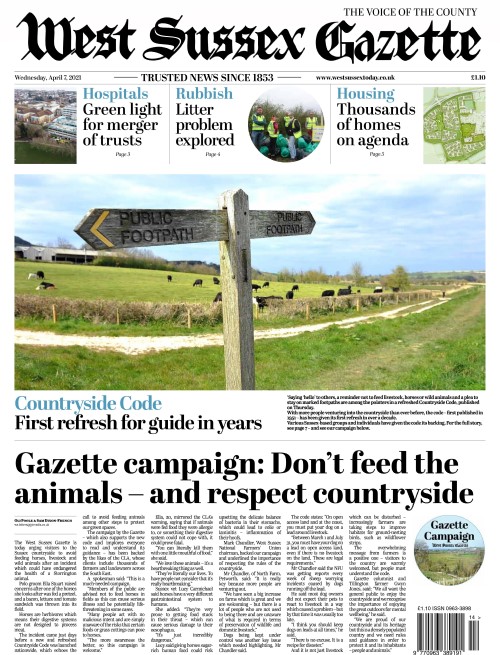 Editor Oli Poole told HTFP: “It all started when one of our reporters wrote a story about a polo groom raising concerns over a horse being fed a pretzel and having a BLT sandwich tossed into its field.

“Bacon can be dangerous for horses as they are herbivores and their systems are not designed to cope with meat.

“The Gazette is traditionally a rural paper and with more people than ever venturing into the countryside – many for the first time – we thought this was a good starting point for an awareness campaign about the dos and don’ts of visiting rural areas.

“In the same week, the Countryside Code was given its first refresh in more than a decade, so we put together a special report and urged readers to make sure they checked it out. The code is mostly common sense but from speaking to farmers on our patch they had experienced a few issues, often from newcomers to the countryside during the pandemic.

“We heartily encourage people to explore the beautiful West Sussex countryside but the campaign is a reminder to do so responsibly.”

The campaign is the first the Gazette has run since Oli took over as editor last month.

He added: “Campaigns like the one we are running showcase how I would like the title to be seen; one that really champions the area and its people and is not afraid to have its say sometimes, while maintaining an independent and balanced outlook.”