A weekly newspaper that previously criticised its patch’s litterbugs has backed a fresh bid to rid the area of rubbish.

The Northampton Chronicle & Echo has lent its support to a campaign by Northampton Town Centre Business Improvement District, which called on businesses to host a ‘Tidy Day’ of cleaning.

HTFP reported in April how the Chronicle & Echo had hit out at “appalling” louts whose behaviour caused it to change its splash to a front page comment decrying litterers. 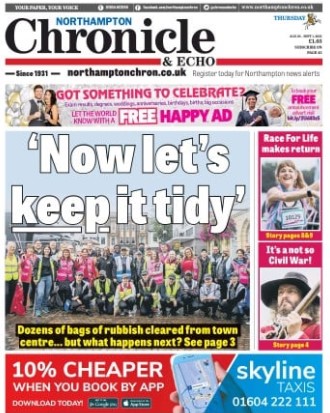 Editor David Summers said: “We fully support the campaign by Northampton Town Centre BID and other stakeholders in the town. But it is down to everyone to play their part.

“We hope that people who use the town centre see this campaign by BID, see the efforts that the town is going to and hopefully think before they decide to just drop the litter on the floor.

“As others have said, this is a time for people to rediscover the town centre – and everyone wants people to experience it in the best possible environment.”