A weekly newspaper has launched a front page bid to preserve a town’s industrial heritage.

The Northamptonshire Telegraph has launched a campaign aimed at saving the “relics” of Corby’s “proud manufacturing and industrial history”.

The campaign’s launch comes after the proposed demolition of the former British Sealed Beams factory, built in the 1960s in the expanding New Town of Corby, was announced.

The campaign provided a splash for the Corby edition of the Telegraph on Thursday, pictured below. 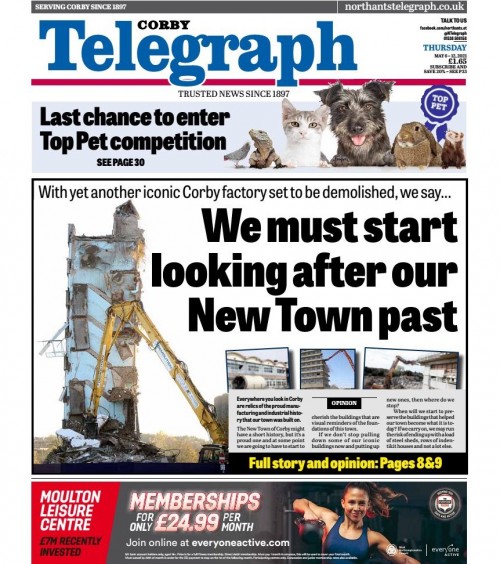 In an accompanying editorial, reporter Kate Cronin wrote: “We don’t have many buildings like this left in Corby. Most of them have been swept away as manufacturing and logistics have developed, modernised and expanded.

“These are our building blocks. These are the places that stuck with our town, that still offered decent, steady jobs when post-steelworks Corby was getting back on its feet.

“So many of the landmark buildings constructed amid the explosion of our town are already gone – the Civic, most of the secondary schools, the bus station, the Welfare, The Open Hearth. And it’s almost unthinkable now that thatched cottages of the Old Village were bulldozed without a second thought.

“The New Town of Corby might have a short history, but it’s a proud one, and at some point we are going to have to start to cherish the buildings that are visual reminders of the foundations of this town.”

Kate went on to examine the way cities such as Birmingham, Liverpool and Manchester have found new uses for their old industrial buildings.

She added: “When will we start to preserve the buildings that helped our town become what it is today?

“If we carry on, we may run the risk of ending up with a load of steel sheds, rows of indentikit houses and not a lot else.”