A weekly newspaper is fighting to give people on its patch a greater say on plans for new shared housing.

The Northamptonshire Telegraph is campaigning on behalf of people in Corby after an investigation by the paper revealed showed there are now 263 large Houses in Multiple Occupation in Corby.

The Telegraph is calling for an Article Four Direction to be made in Corby, which would mean all HMOs for more than three people would have to go through the planning process. 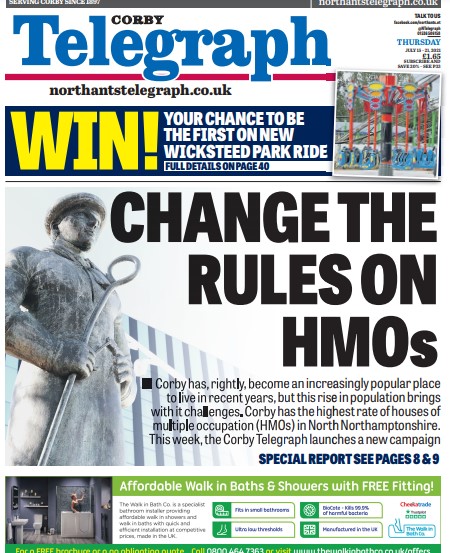 The paper’s Corby edition splashed on the campaign’s launch yesterday, pictured above.

Kate Cronin, Corby reporter at the Telegraph, told HTFP: “I’ve known HMOs have been a problem in Corby for several years. The number of single, low-waged workers and the relatively low price of Corby’s housing stock has been the perfect storm for investors, many of whom have never stepped foot in the town before the day they put in an offer on a house.

“Many readers have contacted me with individual issues relating to HMOs during lockdown so I thought it was time to look a bit more deeply into the issue. Once I started digging, there just seemed to be story after story.

“Corby is a town built by people who moved here from Scotland, with a proud history of giving a warm welcome to migrants and incomers from other parts of the UK. We want to make sure people moving here are living in suitable accommodation and not in squalor.

“We’re really pleased that the council has finally agreed to start a conversation about finding a solution but we will continue to highlight the issue until there is an Article Four Direction, and beyond if necessary.

“We don’t want to drive HMOs out of Corby – they’re a necessity in a town like ours – but some of our most deprived estates are now saturated to the point where they simply can’t take anymore.

“Putting the decision-making back into the hands of our local councillors means we can hold them to account and that Corby people can have a say on any planning applications that come forward for new HMOs.”