A weekly newspaper has launched a bid to help a murder victim’s family protect the public from her paedophile killer ahead of his planned release from prison.

The Northamptonshire Telegraph has demanded paedophile Adam Stein – who raped and killed six-year-old Collette Gallacher in Corby in 1986 – be placed on the Sex Offenders Register once he leaves jail.

An investigation by the Telegraph has also revealed Stein may have other victims and Northamptonshire Police wants anyone who believes they may have been attacked by him to come forward – 35 or more years later.

The campaign and investigation made the front page of the Telegraph yesterday, pictured below, and came after reporter Kate Cronin interviewed members of Collette’s family. 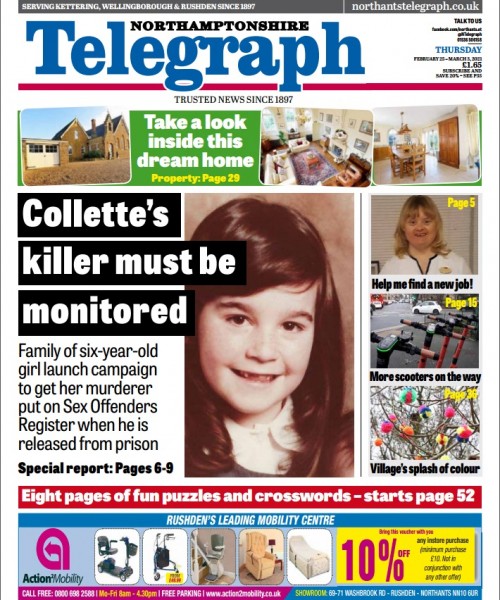 Kate told HTFP: “Collette’s case is one that has never been forgotten in Corby. It’s a tight-knit, loyal community here and people have always been incredibly supportive of Collette’s family. Many of them still remember walking silently through the woods in February 1986 searching for her.

“The Northants Telegraph and many reporters before me always dealt with the case and its impact on Corby in a sensitive and measured way. The family approached me to help them with their campaign because they trusted our paper to do a good job.

“I spent many hours talking to Claire and Lauren Homes – Collette’s sisters – and we have had several conversations about how best to tackle the story.

“I made sure that they knew what to expect from us every step of the way because the impact of us getting this wrong, or of us publishing something that wasn’t accurate, was too awful to contemplate.

“Going through the 35-year-old files and deciding what to include and, importantly, what to leave out, was incredibly emotional.

“I knew it was vital that we accurately reflected on just how much pain this monster caused to our town and to Collette’s family so that he is not able to fool any more victims into trusting him once he is released from jail.

“It’s difficult to understand how someone can do something so horrific that it destroys the lives of so many people and yet not be placed on the sex offenders register. It just makes dealing with this so much worse for Collette’s family.”

Kate added she felt “incredibly honoured” that Collette’s family had placed their faith in her and the Telegraph to tell their story and help their campaign.

She said: “It’s a huge responsibility and one we take very seriously. The feedback to the four stories we published over two days this week has been overwhelming.

“People in Corby can always be relied on to look after their own, and I know it has been of huge comfort to the family to have so many local people willing to help them fight their corner.

“We will continue to campaign for justice for Collette for as long as her family wants us to.

“We will do everything in our power to help get him on the register, and we are confident that the Home Secretary will pay close attention to the strength of feeling in our town.”