A weekly newspaper has thrown its weight behind a bid to turn the town it serves into a city.

The Northampton Chronicle & Echo has called for Northampton to apply for city status, describing the opportunity as “too good to miss”.

City status will be granted to a select few towns as part of next year’s Queen’s Platinum Jubilee celebrations next year and applications are needed by the 8 December deadline.

The Chronicle & Echo splashed on the campaign yesterday, pictured below. 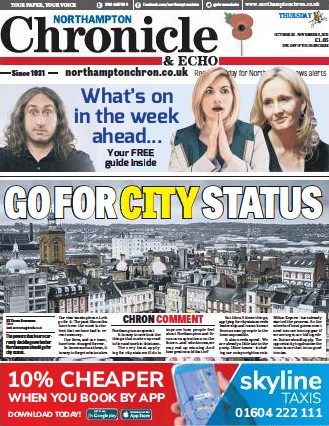 In an accompanying comment piece, editor David summers wrote: “The opportunity to galvanise the town is one that is too good to miss.

“The easiest response to the question, should Northampton apply for city status, is no.

“And there will no doubt be people whose response to our comment is one of ridicule and incomprehension. We can almost hear the tone of some our readers on Facebook now…

“But those vocal minorities don’t represent the many tens of thousands of people living and working in Northampton who are proud to do so.

“Northampton, clearly, is not without its problems and like many other towns up and down the country has suffered from the impact of the pandemic which has hastened the change in our town centre.

“But there are so many things for Northampton to proud of and, at the very least, launching a campaign for city status will give the opportunity to showcase what makes our town so special and remind all of us why we should take pride in Northampton.

“So our response is a simple yes.”