Give us a new Duke and Duchess, say Sussex weeklies 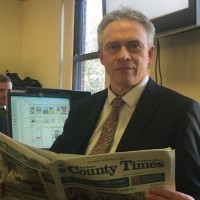 A group of weekly newspapers are demanding the Duke and Duchess of Sussex are stripped of their titles and replaced by people more “worthy” of the name.

Gary Shipton, editorial director for JPIMedia’s titles in Sussex, has launched a campaign for a new Duke and Duchess to be appointed following Harry and Meghan’s bombshell interview with American television.

Gary, pictured, says he wants to find new “figureheads for the county” who “can manage more than one official visit”.

The campaign’s launch comes after the couple, who gave up official duties and relocated to the USA last year, made a series of allegations against the Royal Family in an interview with Oprah Winfrey which aired on ITV last night.

During the interview, the Duchess said she found royal life so difficult that at times she “didn’t want to be alive any more” and claimed the Duke was asked by an unnamed family member “how dark” their son Archie’s skin might be.

The Duke himself also alleged Prince Charles had stopped taking his calls when he wanted to step back from official duties.

Speaking to HTFP, Gary said: “West and East Sussex should be represented by selfless county servants who are prepared to give up their time to encourage and inspire the many great groups and individuals who operate and live here.

“There was massive support for Meghan and Harry when they were first named as Duke and Duchess but they only managed one official visit – causing widespread disappointment to so many who wanted to welcome them.

“Today we are asking readers who they would want to see representing the county in this role if the decision rested with them.

“The names do not have to be drawn from the aristocracy – but anyone who makes a huge commitment to local people.”

Meanwhile Ian Murray, executive director of the Society of Editors, has hit back at the couple’s claims that sections of the UK press are bigoted.

“It is not acceptable for the Duke and Duchess to make such claims without providing any supporting evidence. If it is simply the case the Sussexes feel that the press by questioning their actions and commenting on their roles when working as Royals funded by the taxpayer were being racist then they are mistaken,” said Ian.

“In the case of Meghan Markle and her engagement and marriage to Prince Harry there was universal supporting coverage in the UK media which reflected the warmth shown to the couple by the British people. But that warmth could not and should not mean the press should be expected to refuse to report, investigate and comment on the couple’s lifestyle and actions.

“It is a pity the couple did not mention in their interview the huge support the UK media has shown to the charitable works carried out by the Duke and Duchess. The UK press also played a large role in ensuring the prince’s service in Afghanistan went ahead, agreeing to an embargo on reporting his deployment to enable him to carry out his Army role in the Middle East.

“The UK media has a proud record of calling out racism and also being at the forefront of campaigns to support mental health awareness, another of the issues raised by the couple.

“It is also unreasonable for the Duke and Duchess to conflate the legitimate coverage provided by the edited and regulated UK media with the wild west of social media.

“The UK media has never shied away from holding a spotlight up to those in positions of power, celebrity or influence. If sometimes the questions asked are awkward and embarrassing, then so be it, but the press is most certainly not racist. “