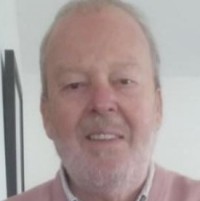 A versatile journalist who “brought talent, passion and wisdom” to every newsroom he worked in has died aged 75.

Tributes have been paid to Russell Steele, who covered news, business, features and sport for titles including Newsquest sister dailies the Glasgow Evening Times and The Herald.

In an obituary, Herald columnist Hugh MacDonald described him as having “substantial, peerless journalistic gifts and a boundless, bountiful personality”.

Hugh wrote: “He brought talent, passion and wisdom to every newspaper, every area in which he toiled.

“His greatest gift, though, was his generosity of spirit that extended powerfully into his private life. Rusty was one of the good guys.

“In the parlance of newspapers, he was also ‘a good operator’: the equivalent of being designated a professor emeritus at a university or being asked to join a royal society as a surgeon.

“Indeed, it may be tougher. Journalists are traditionally sparing with their praise. They were not with Rusty. He was held in particular affection and respect by younger journalists.

“He was a mentor before that role was recognised. He was a relentless supporter of those who worked under him.

“This is said with the unalloyed certainty and profound gratitude of personal experience.”

Russell’s career began aged 18 when he secured a traineeship with The Herald.

Hugh added: “He was a distinguished, articulate and highly intelligent man but it was other qualities, pure in their almost childlike simplicity, that made him so beloved. He was unconditional in his love for family and friends.

“He could be quick to anger but quicker still to resolve acrimony. He was brilliant in his profession but used that light to guide others.

“He was toothless when it came to back-biting. He rose above the mire that can sully even the innocent in a brutal business.

“A vast array of journalists will remember him with a smile and a nod of respect, even heartfelt thanks. His friends – and there are many – have only the consolation that we were lucky to know him, luckier still to have him as a humble promoter and educator.”

Russell is survived by Cath, his wife with whom he would have celebrated 54 years of marriage next month, following his death on 20 October.