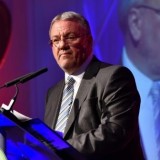 A university has awarded a long-serving former regional daily editor an honorary degree.

The University of Bradford has bestowed the honour upon Perry Austin-Clarke, who edited the Bradford Telegraph & Argus for 25 years.

At the time of his departure in 2017, Perry was the longest-serving regional daily editor in the UK.

Perry, pictured, told the Telegraph & Argus: “I am extremely proud, honoured and grateful to the University for this award. It’s very humbling to be recognised in this way.

“When I moved to Bradford in 1992, I had no idea I would still be here almost 30 years later. But that’s the effect Bradford has on ‘offcumdens’ [a Yorkshire dialect phrase for non-locals]: its people are warm, friendly and generous; its architecture, buildings, culture and history are amazing; and its potential is endless.

“It’s an inspiring place to live and work and its biggest challenge is that too many people who were born and brought up here can’t always see it.

“I know that this award is not just for my 25 years at the T&A, but I worked with many brilliant, committed journalists at the paper through some of the city’s most difficult periods, and I would like to think this is also, in some ways, a tribute to them for their dedication in providing a responsible, reliable and trustworthy news service to the readers throughout that time.”