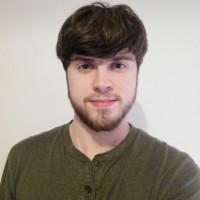 A trainee reporter who moved to the UK just weeks before the first coronavirus lockdown has been named young journalist of the year at an awards ceremony.

Ryan, pictured, started working for Newport Online in February, having moved from his native Cork, and has spent all bar a month of his career in Wales working from home.

He won the award, presented in memory of late South Wales Echo news editor Nick Machin, after impressing judges with a portfolio they described as “outstanding”.

It included a series of features including an examination of the future for Newport’s troubled Friar’s Walk retail development, a portrait of a group of war veterans rebuilding their lives amid PTSD and chronic injury, and an account of a heroin addict’s attempts to kick his 20-year habit, which also earned him a nomination for outstanding story or feature.

Praising Ryan’s submissions, the judges said: “Ryan was the most outstanding story-teller. His writing is so good.

“You really feel like he cares about the people he is interviewing, and each feature was compelling.”

The night’s other award, for outstanding story or feature by a young journalist, was won by BBC News journalist Gareth Evans for his feature The Mother and the Murderer, about the murder of Angie Dodge in the US state of Idaho, and the campaign by the victim’s mother to free the man convicted of her murder.

They added: “It was like a Netflix drama. ‘There was a U-turn every few paragraphs and we kept wanting to read more. Our winner has clearly done some painstaking work; an incredible story, really well told.”